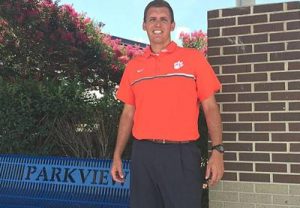 Coach Gast is in his 8th year at Parkview High School and his fourth year as Athletic Director.  Prior to being named AD at Parkview he was the Head Boys Basketball Coach and PE Teacher.

Coach Gast graduated from Bishop Kenny High School in 1998 and went on to attend Valdosta State University where he played basketball for 4 years.  At Valdosta State he was a 4 year starter and a member of the 1,000 point club.  He is one of the top 20 leading scorers in school history at VSU.  He also graduated from VSU with a Bachelors and Masters Degree in Heath and Physical Education.

Coach Gast lives in Lilburn with his wife Traci and their twin children Caleb (8) and Caroline (8).